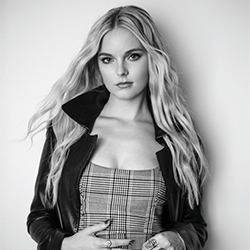 “‘Better Strangers’ was first inspired by a Shakespeare line that really struck a chord with me, ‘I do desire we may be better strangers,’” shared Collins. “After the end of a relationship, there was a time I wished I’d never met that person. Although that heartbreak helped shape who I am today, I still wish I could meet the girl I would’ve been if that relationship never happened. I hope this song connects to anyone who’s ever felt like they lost a part of themselves to a heartbreak.”

With “Better Strangers,” the multifaceted artist continues her tradition of painting her own cover art. “For this song, I wanted to paint a comic version of myself,” said Collins. Watch her create the masterpiece here.

“Better Strangers” follows her latest release, “Tattoos.” Billboard lauded Collins’ “gritty” voice on the “moody, sultry piece,” while CMT called out her “country-rock vocals,” deeming the song a “potential chart-topping hit.” Earlier this year, she dropped her debut offering, “Heavenly,” which Country Swag called “beautiful and poetic” while pointing out Collins “is a true visionary.”

The singer-songwriter and multi-instrumentalist, who is also signed to Warner Chappell Music, moved from her hometown of Lake City, Florida to Nashville three years ago, armed with words and melodies she’s been collecting and writing for nearly a decade. Collins grew up listening to metal bands such as Guns N’ Roses and Alice in Chains with her dad on her way to elementary school, idolizing Bob Dylan, and immersing herself in novels by the likes of Cormac McCarthy.

Her artistic depth is tempered with youthful wonder and her rich, power-house voice. At their focal points, her songs are diary-ripped lyrics wrapped in lush instrumentation neatly folding in her myriad of wide-ranging influences including The Eagles, Stevie Nicks, Leonard Cohen, and Willie Nelson.