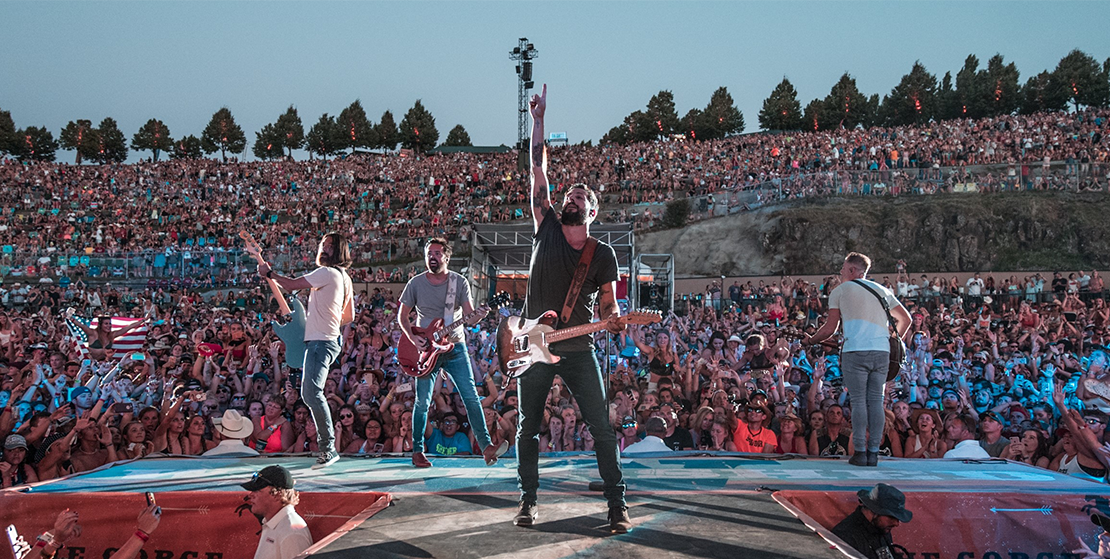 Upholding an unbelievable hot streak, acclaimed country band Old Dominion gains another No. 1 hit single on the Billboard Country Airplay and Mediabase/Country Aircheck charts with “Hotel Key.” This achievement marks the band’s SIXTH No. 1 song, which includes all singles that have come off the band’s sophomore album Happy Endings. Click HERE to listen to “Hotel Key.”

This news comes on the heels of Old Dominion’s sold-out, bucket list show at the historic Ryman Auditorium in Nashville for their very special headline performance: “An Evening With Friends.” The event raised $60,000 for charity, with proceeds equally benefitting the Opry Trust Fund and the Ryan Seacrest Foundation.

“An Evening With Friends” represented another milestone for the group nominated for 2018 CMA Vocal Group of the Year. Performing at the historic venue was like playing on hallowed ground. The reigning Academy of Country Music Vocal Group of the Year welcomed a bevy of special guests to the stage including Kenny Chesney, Kelsea Ballerini, Sam Hunt, and Michael Ray. After selling out arenas across the U.S. and Canada on the winter leg of their “Happy Endings World Tour,” the band wanted to check the iconic venue off their bucket list before picking back up on the fall leg of their arena tour. The run is set to kick off Oct. 4 in Knoxville, TN at the Knoxville Coliseum. Tickets on sale now  HERE.

It was a scorching summer for Old Dominion. The band recently released their Spotify Singles — “Hotel Key” and a cover of Halsey’s “Bad At Love. They also performed “Hotel Key” and “Written In The Sand” as part of the star-studded lineup for ABC’s “CMA Fest” television special. “Written In The Sand” was also honored during the recent NSAI Nashville Songwriter Awards. The group’s marathon tour cycle in support of its chart-topping second full-length album, Happy Endings, is well underway as they headline venues coast-to-coast. See the full itinerary below.

In addition to their current success, the band’s sophomore album, Happy Endings, debuted at No. 1 on Billboard’s Top Country Albums chart and No. 7 on the Top 200. Old Dominion has also surpassed 1 billion on-demand streams.