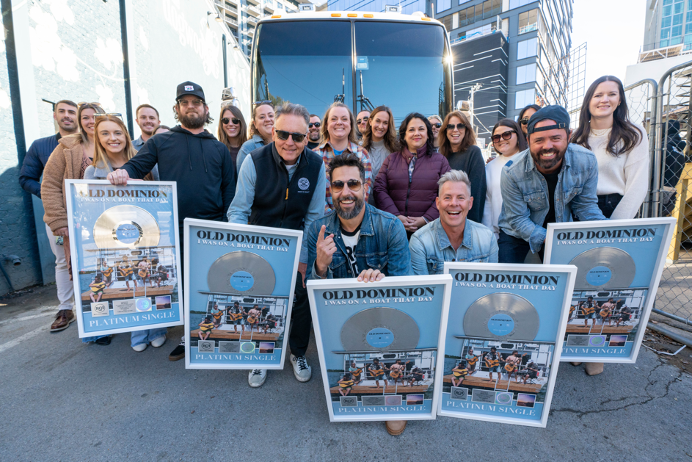 NOMINATED FOR CMA ALBUM OF THE YEAR

Old Dominion, multiple 2022 CMA Awards nominees, were surprised by the Arista Nashville/Sony Music Nashville team with the news their Top 10 hit “I Was On A Boat That Day” has achieved RIAA Platinum certification. “I Was On A Boat That Day,” written by OD’s Matthew Ramsey, Brad Tursi, Geoff Sprung, Trevor Rosen and Whit Sellers alongside award-winning songwriters Shane McAnally and Josh Osborne, was the lead single from Old Dominion’s fourth full-length project Time, Tequila and Therapy. Recently receiving a nomination for Album of the Year at the 2022 Country Music Association Awards, it expands the band’s mark on today’s country

“I Was On A Boat That Day” is Old Dominion’s eighth Platinum-certified song. It continues their precious metal career as their two previous albums have received both Platinum and Gold certifications, as well as two other Gold-certified songs.

The surprise plaque presentation was made as the band was gearing up for Monday’s Whiskey Jam performance, where the band got their original start. They returned to Loser’s for Whiskey Jam, in part to celebrate the announcement of their 2023 NO BAD VIBES. Having spent this summer on the stadium portion of Kenny Chesney’s HERE AND NOW 2022 TOUR, they crowned the run with the Chesney collaboration “Beer With My Friends,” currently climbing the country charts.

Fans of the reigning, four-time CMA Vocal Group of the Year and five-time ACM Group of the Year can check out Old Dominion at one of their 30 NO BAD VIBES dates next year. Tickets go on-sale to the general public Friday, Oct. 28 at 10:00 a.m. local time.