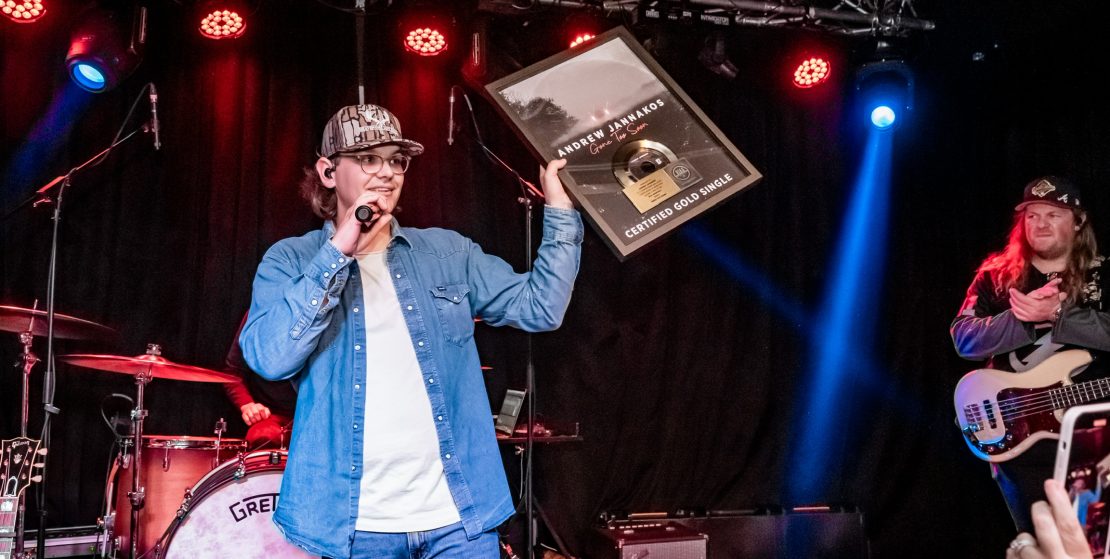 On December 23, Jannakos took the stage for a sold-out crowd in his hometown, Flowery Branch, GA, where he was surprised with a RIAA Gold-certification plaque for his explosive debut single “Gone Too Soon.” Upon the official release of “Gone Too Soon,” Jannakos earned a #1 debut on Billboard’s Emerging Artist Chart, while the track landed at #12 on Billboard’s Hot Country Songs chart and within the Hot 100. The song has amassed over 90 million on-demand streams to date.

Recently, Jannakos released new track “Heaven’s Like A Hometown,” which CMT praised that it not only shows off his “colorful knack for songwriting, but [also] his robust vocals made for the radio,” while Country Now deemed the song “a slice of nostalgia with a whole lot of heart.” The Nash News added, “With a voice like Jannakos,’ one can never go wrong.”

Andrew Jannakos’s hit song “Gone Too Soon” in 2020 was not only a massive success, but it also served as the catalyst for massive change to come in the rising star’s life, including a move to Nashville from his hometown in Georgia, signing a record deal with Sony Music Nashville/RCA Nashville, and racking up millions of streams weekly.

In the years following, Andrew began plotting his next batch of music. He moved his family to a big piece of land 50 minutes outside of the city, with plenty of space for introspection to prioritize what he wanted to say with these new songs. In the process, he found himself spending majority of his time outdoors. When the singer wasn’t perched in a deer stand, he would take his kayak down to the nearby creek and fish, and sometimes bring his son to the shore to look for crawdads – something he did when he was growing up. In the stillness he was filled creatively and rediscovered what inspires him the most…his family, nature, God, and spending time with all three. Andrew was brought back to his core and began to pen songs that are reflective of that. The result is a new batch of music he’s set to release in 2023 that’s a compilation of stories that make Andrew who he is.
AndrewJannakos.com | Instagram | Facebook |  TikTok |  YouTube