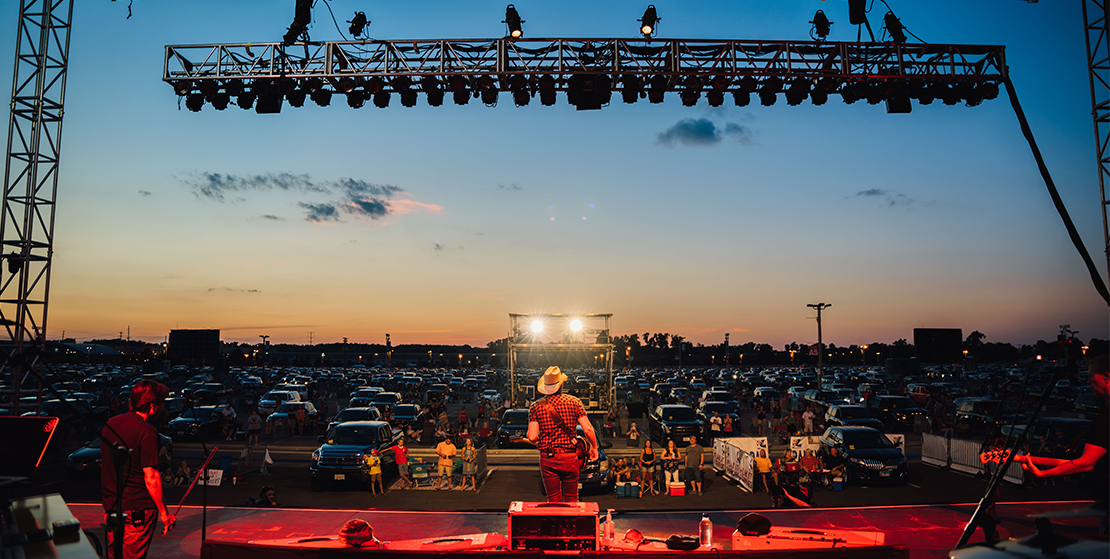 This past weekend country superstar Brad Paisley performed with his full tour set up for his first in-person live music concert since mid March. He headlined the first ever Live Nation U.S. drive-in concert series, Live From the Drive In, and sold-out all three stops, St. Louis, Nashville and Indianapolis. The 90 minute concert was filled with career hits such as “Mud on the Tires,” “American Saturday Night,” “Then,” I’m Still A Guy,” “Ticks,” as well as his current single and fan favorite, “No I In Beer.”

From the stage Paisley said, “It’s not lost on us how big a blessing it is to play music in these times. Thank you so much for giving us this memory tonight. I hope we’ve given you a memory too. You were amazing!”

On Paisley’s socials he posted a recap video with this message, “This was our weekend. The back row of cars was over a quarter mile away, but somehow I’ve never felt closer to an audience. Everyone went the extra mile to make this work, and somehow, safely, we played live music again. Thank you St Louis, Nashville, and Indy. These are the moments we will never forget. View HERE.

The Nashville performance from Nissan Stadium parking lot was live streamed on Paisley’s Facebook page and has garnered over 640,000 views, so far and can be watched HERE.  While the Facebook live was free for fans to watch, they had the option to donate to The Store, a nonprofit free-referral based Nashville grocery store co-founded by Brad and Kimberly Williams-Paisley. During the livestream fans donated over $25,000.

Live Nation reimagined the live music experience during a time of social distancing by allowing fans to enjoy concerts in a one-of-a-kind drive-in setting from their own private tailgating zones next to their cars. Concert-goers went all out to make the experience their own with vintage cars, yard games, chairs and plenty of food and drinks. The main focus for the weekend was social distancing, and Live Nation worked closely with local officials and health experts to carefully plan all aspects, from the layout to sanitation and everything in between to ensure everyone’s safety. Speakers blasted the live music across the parking lots and huge video walls were scattered so guests could have a visual on the performers.