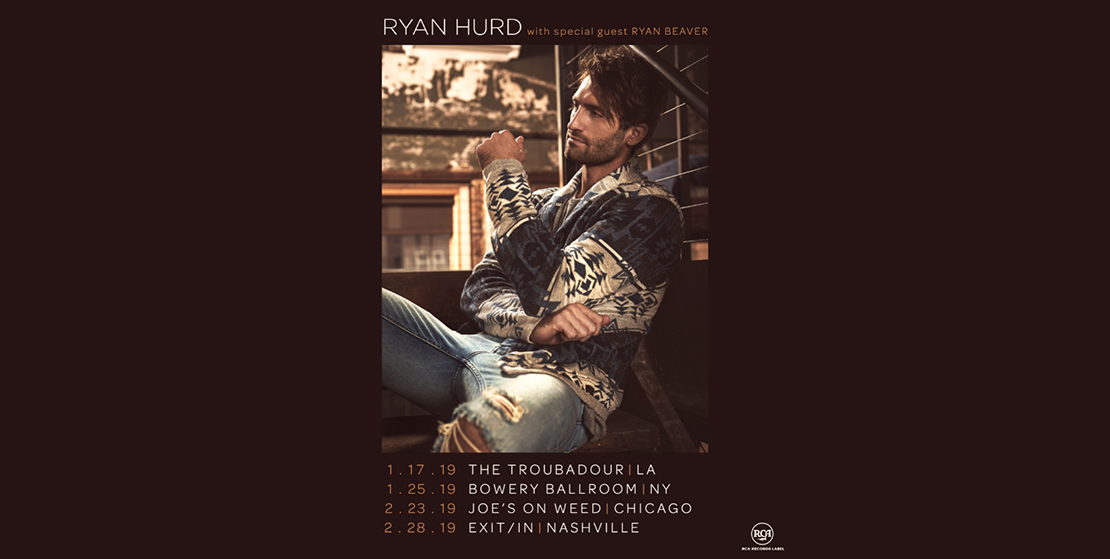 And Hurd delivers in 2019, with four, full-band performances at some of the country’s most respected music rooms. Hand-picked by Hurd, the clubs set the right feel for Hurd’s trademark powerful lyrics and melodies woven around real-world emotions.

“These are my first American shows in over a year and they are in four of my favorite markets; and in absolutely iconic venues,” said Hurd. “We’ve built a lot of momentum this season with the release of ‘Diamonds or Twine’ and ‘To A T,’ it’s exciting to get to share all of it live with our fans.”

Concert dates, which include special guest Ryan Beaver, include the Troubadour in Los Angeles (Jan. 17), the Bowery Ballroom in New York City (Jan. 25), Joe’s on Weed St. in Chicago (Feb. 23), and the Exit/In in Nashville (Feb. 28). Purchase tickets HERE.

The performances follow the success of Hurd’s latest single, “To A T,” which has caught the attention of entertainment tastemakers including men’s lifestyle playbook, Esquire. Accolades include Wide Open Country, which called the song “a gorgeous ode to intimacy and quiet moments spent with a soulmate,” Cowboys & Indians which wrote, “swoon-worthy lyrics,” and The Boot, which opined that “To A T” “oozes romance, love and the intimacy that comes from truly knowing a partner.”

Those aren’t the only media gatekeepers paying attention to the rough-cut romantic. Hurd was named an “Artist To Watch” by VEVO, Pandora, CMT, Huffington Post and Rolling Stone Country, which lauded him for “generating major buzz” and “making waves online.”

The praise is earned. The native of Kalamazoo MI is one of Nashville’s most multi-dimensional young songwriters. He has had co-pen credits on some of the format’s biggest hits including “Lonely Tonight” (Blake Shelton), “You Look Good” (Lady Antebellum), and “Sunrise, Sunburn, Sunset” (Luke Bryan).

Now with the release of his own music, fans are discovering the fuel that drives Hurd is often love with all its avatars. Inspiration is in close proximity. In March, Hurd released “Diamonds Or Twine” as a present for his then soon-to-be wife Maren Morris after secretly recording the track with his long-time producer Aaron Essuis.

Hurd has been on the road with Thomas Rhett, Morris, and Florida Georgia Line. For more on Ryan Hurd and to catch him on tour, visit RyanHurd.com.