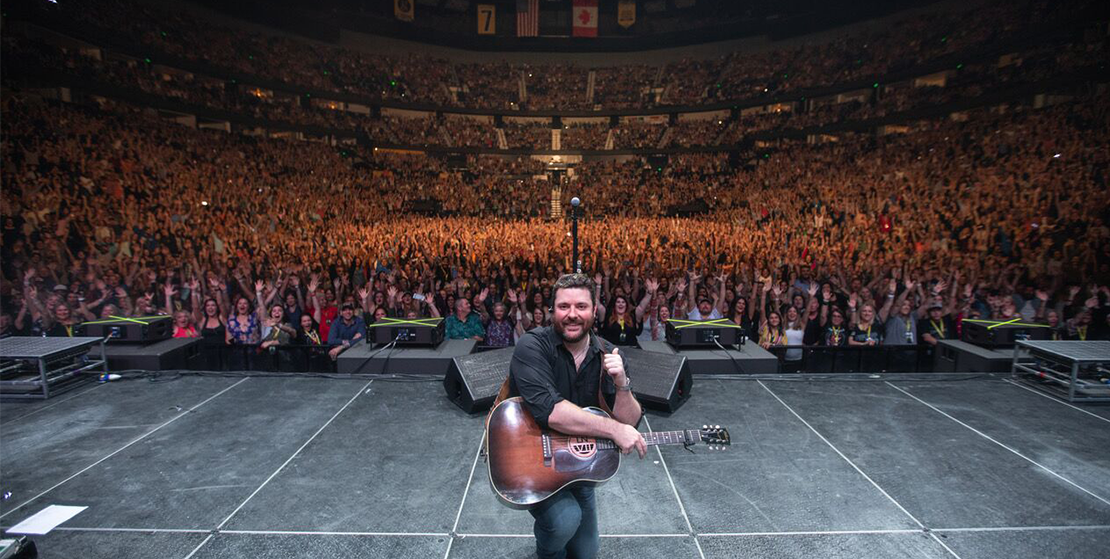 ACM and Grammy nominated vocalist Chris Young played his first-ever headlining concert at Music City’s most massive indoor music venue, Bridgestone Arena, over the weekend, performing until after 11pm for a screaming, sold-out hometown crowd whose cheering reached 116 decibels throughout the more than 90 minute show. It was an unforgettable night for the Murfreesboro, Tennessee native who celebrated his 33rd sold-out show of the “Chris Young Losing Sleep World Tour” in an arena packed to the rafters with nearly 14,000 fans, friends and family.

“Young came in clear and strong, his distinct baritone sliding through the verses and chorus as fans sang along at a volume that rivaled his own…he’s not only making hit songs, he’s building a lasting career,” declared The Tennessean.

The night kicked off with an opening set by Warner Music artist Morgan Evans followed by Young’s Sony Music Nashville labelmate, Kane Brown. The capacity crowd was on its feet for Young’s entire 17 song show – which featured 9 of Young’s 10 chart-topping singles – and the audience received a special treat as friendsBrad Paisley (“I’m Still A Guy”) and Cassadee Pope (“Think Of You”) joined Young onstage for surprise performances.

The RCA Records Nashville artist has had the opportunity to headline the city’s most esteemed venues, including Ryman Auditorium (2012) and Ascend Amphitheater (2015). Bringing his headlining tour home to Nashville and Bridgestone Arena has been a dream come true for the 33-year old.

Nashville’s headlining show closed a weekend of arena tour dates that also included a sold-out stop at Biloxi’s Mississippi Coast Coliseum. After a few days at home in Nashville, Young returns to the road with “Losing Sleep World Tour” dates in Charleston, SC (9/27), Greensboro, NC (9/28) and Philadelphia, PA (9/29). Tickets and VIP packages for the “Losing Sleep 2018 World Tour,” promoted by AEG Presents and Concerts West, may be purchased at ChrisYoungCountry.com.

ABOUT CHRIS YOUNG: By his 33rd birthday, RCA Records Nashville artist Chris Young has accumulated an impressive list of accomplishments, including membership in the iconic Grand Ole Opry, ten No. 1 singles, seventeen R.I.A.A. Gold/Platinum/Multi-Platinum certified projects, 2 Grammy nominations, 3 Country Music Association nominations and 4 Academy of Country Music nominations. As a prolific creator, Chris has given fans 7 studio albums in 12 years including Losing Sleep, his third project in less than two years and the Platinum certified title track is his eighth No. 1 as a songwriter. Losing Sleep (2017) and I’m Comin’ Over  (2015) debuted at No. 1 on Billboard’s Top Country Albums Chart with “I’m Comin’ Over” becoming Young’s first 2x Platinum single.

Named “one of his era’s finest traditionalists” by the Associated Press, Chris has quickly become an international ambassador for country music, performing to capacity crowds around the world including the sold-out C2C Festival in the UK. With a hit-packed set that highlights his ten chart-toppers — including back-to-back No. 1s “Losing Sleep,” “Sober Saturday Night,” “Think Of You,” and “I’m Comin’ Over” — the Grammy and ACM nominated vocalist is headlining the Chris Young Losing Sleep 2018 World Tour, with more than 55 arena and amphitheater dates on the books including his first hometown headlining show at Nashville’s Bridgestone Arena this fall.