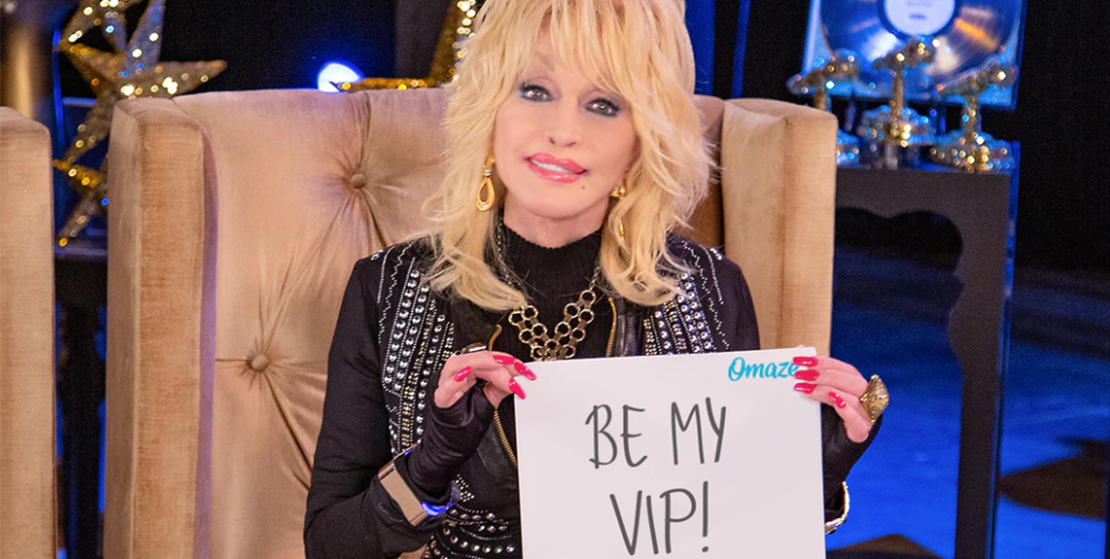 Dolly Parton’s spirit of imagination is stamped on culture, as evidenced by her Imagination Library, which since 1995 has delivered more than 100 million books to children from birth to five years of age across the globe. Now, on the eve of the release of her much-anticipated Dumplin’ Original Motion Picture Soundtrack album release (November 30), Parton is teaming with Omaze, to offer her fans an extraordinary opportunity.

Beginning today, through January 17, 2019 at 11:59 pm Pacific Time, fans will have the chance to win the ultimate Dolly Parton experience: a winner and their guest will get to to spend one night in Dolly Parton’s personal suite at her Dollywood Dream More Resort! Additionally, Dolly herself will give a private tour of her home-away-from-home, while meeting the guests, taking pictures with them and signing autographs for them. This once-in-a-lifetime experience will be enhanced with additional nights at the resort in other rooms, tickets to Dollywood during its 2019 Grand Opening Weekend, and passes to Dolly Parton’s Stampede dinner theater. Fans can visit Omaze.com/Dolly to enter for their chance to win. Proceeds support Dolly’s own Imagination Library.

The Omaze campaign integrates special donation bundles including a copy of Parton’s Dumplin’ Original Motion Picture Soundtrack. Today, VEVO premiered the third music video from the project—following the compelling “Here I Am” (with Sia) [view here] and the stunning “Girl In The Movies” [view here] – for “Jolene (New String Version)” [ view here] which saw its broadcast television premiere over the weekend during Parton’s appearance on CMT Hot 20 Countdown. The clip will also be featured in “Dolly & Friends: Making of a Soundtrack,” a one-hour special premiering on CMT on Thursday, November 29, 9/8 pm Central Time.  The prime-time special features Parton in the recording studio with famed producer Linda Perry and recording with artists Alison Krauss, Elle King, Macy Gray, Miranda Lambert, Mavis Staples and Rhonda Vincent. To view a promo of the special clickHERE.

Music fans can pre-order now the highly anticipated Dumplin’ Original Motion Picture Soundtrack. The soundtrack, which features Parton on every song, releases November 30, and “Dumplin’” will premiere in select theaters and on Netflix on December 7.

About “Dumplin’”
Dumplin’ (Macdonald) is the teenage daughter of a former beauty queen (Aniston), who signs up for her mom’s pageant as a protest that escalates when other contestants follow her footsteps, revolutionizing the pageant and their small Texas town. The Netflix Film stars Macdonald (Bird Box, Patti Cake$) and Aniston (Upcoming Murder Mystery, Horrible Bosses, Marley and Me), in addition to Odeya Rush (Lady Bird, Goosebumps), Dove Cameron (Agents of S.H.I.E.L.D., Liv and Maddie, Descendants), and Harold Perrineau (Claws, Lost). It is directed by Anne Fletcher (The Proposal, 27 Dresses).

Screenwriter Kristin Hahn wrote the adaptation of Julie Murphy’s No. 1 New York Times bestselling novel of the same name. Producers include A Cota Films and 50 Degrees Entertainment Presentation – Michael Costigan (American Gangster, A Bigger Splash, Brokeback Mountain, Ghost in the Shell), Hahn (The Switch, Cake), Mohamed AlRafi (Above Suspicion, Lying and Stealing), and Trish Hofmann (Gringo, Get On Up). Executive producers are Aniston and Danny Nozell.