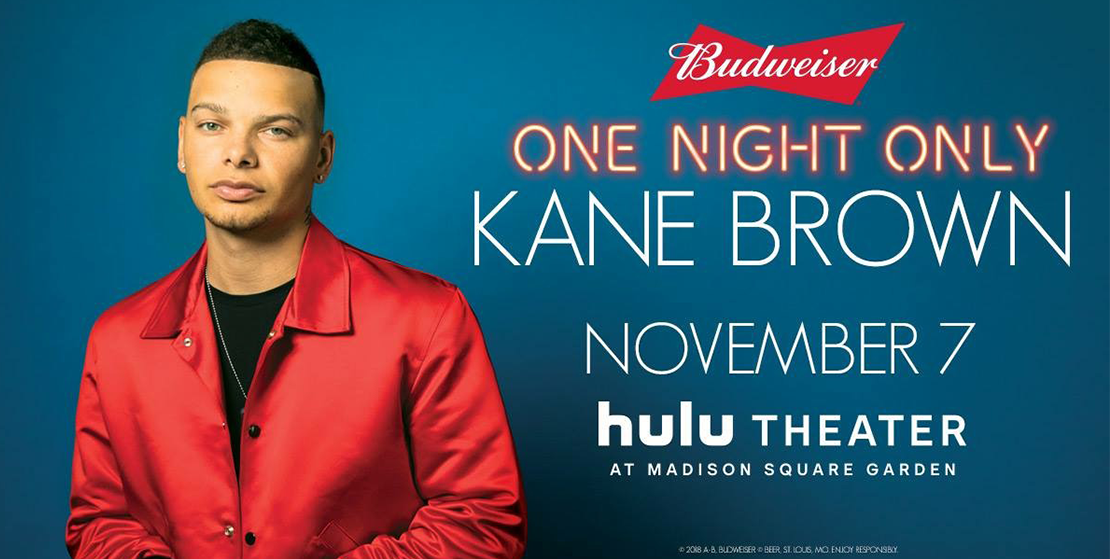 MSG Live, in association with Budweiser, has announced that multi-platinum entertainer Kane Brown, with special guest Clare Dunn, will perform at the Hulu Theater at Madison Square Garden on Wednesday, November 7 at 7:30 PM as a part of the Budweiser One Night Only concert series. Tickets will go on sale to the general public on Friday, September 28, 2018 at noon.

The “One Night Only” concert series includes intimate performances at The Madison Square Garden Company venues – bringing fans closer to the music than ever before. The series so far has included performances by Florida Georgia Line, Aaron Lewis, Rascal Flatts, X Ambassadors with platinum recording artist Post Malone, and Phillip Phillips.

Brown’s highly-anticipated next album Experiment (RCA Nashville/Zone 4) is produced by multiple-award winner Dann Huff. The new recording features several tracks co-written by Brown including his current single, “Lose It,” which was singled out by the New York Times as “urgent and saucy…broad-spectrum ecstasy” and continues to gain momentum as a top 20-and-climbing hit on Billboard and Mediabase country airplay charts and Nielsen’s Country Core On-Demand Audio and Video Streaming charts. As Brown prepares for the launch of his follow-up album Experiment on November 9 and his first ever arena headlining tour, the Kane Brown: Live Forever Tour, on January 10, fans and critics are focused on his unique musical party.

Tickets for the November 7 show will be available for purchase by the general public beginning at noon on Friday, September 28 via ticketmaster.com and by calling Ticketmaster at 866-858-0008. Tickets will also be available in person at the Madison Square Garden, Radio City Music Hall and Beacon Theatre box offices beginning Saturday, September 29.