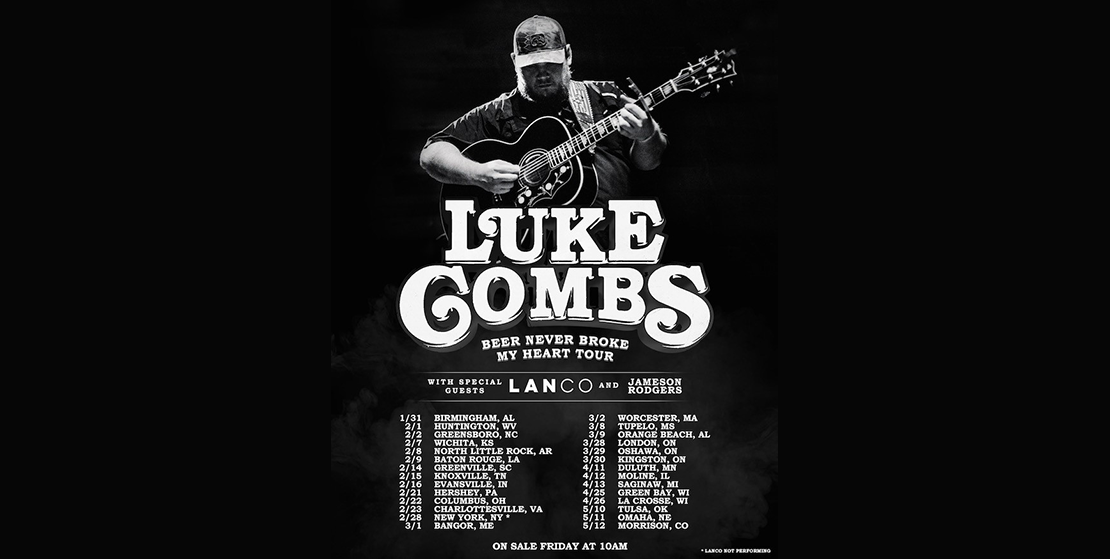 His second headline tour, the “Beer Never Broke My Heart Tour” follows Combs’ record-breaking, 55-city sold-out “Don’t Tempt Me With A Good Time Tour”—completed earlier this year—and will be preceded by a series of fall U.K./European headline shows—which sold out months in advance. See below for details.

The tour culminates a massive breakthrough year for Combs following the release of his Platinum-certified debut album, This One’s For You, released on River House Artists/Columbia Nashville. The album is currently #1 on the Billboard Top Country Albums chart for the 14th week—the most weeks of any country album released since Chris Stapleton’s Traveller.

This One’s For You is currently the most-streamed country album of 2018, achieving over 1 billion streams and was also the largest album debut from a new country artist in 2017. The album debuted at #1 on the Billboard Country Albums Chart and #5 on the Billboard Top 200 Chart. Additionally, Combs has had three consecutive #1 radio singles—3x Platinum “Hurricane,” 2x Platinum “When It Rains It Pours” and Platinum “One Number Away.”

In addition to his breakout debut album, Combs released the deluxe edition, This One’s For You Too, earlier this summer, which landed at #1 on the Billboard Top Country Albums Chart and #4 on the Billboard 200 Chart.

This One’s For You was produced by Scott Moffatt (except for “One Number Away,” which was co-produced by Sammy Mitchell and Jackie Boyz) and recorded in Nashville, TN at Gold Cassette Studios and Direct Image Recording Studio