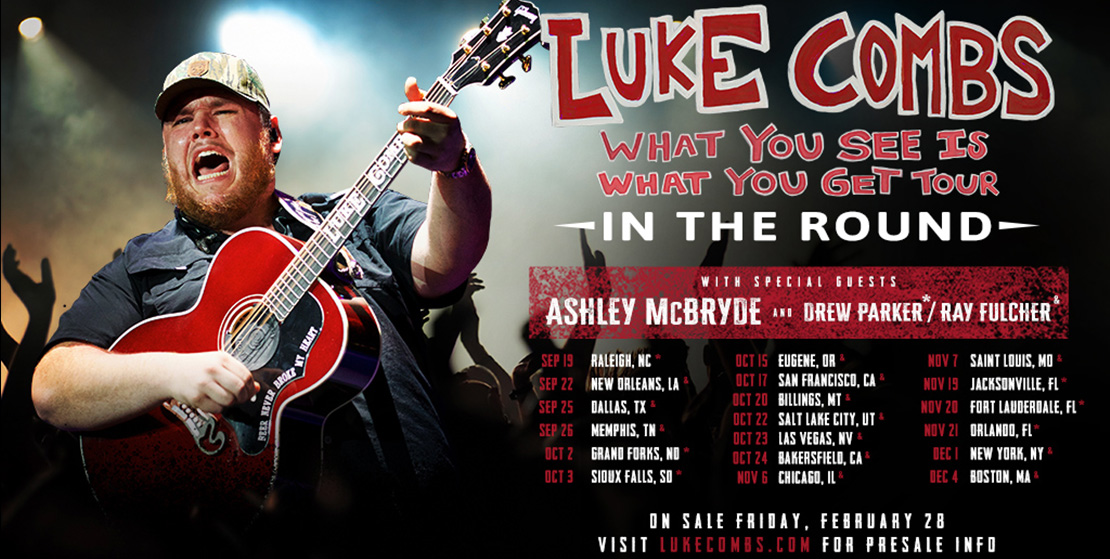 Tickets for the shows—which will feature special guests Ashley McBryde, Drew Parker and Ray Fulcher—will be available for pre-sale starting next Tuesday, Feb. 25 at 12:00 p.m. local time with general on-sale following on Friday, Feb. 28 at 10:00 a.m. local time. Combs’ official fan club, The Bootleggers, will once again have early access to tickets through Ticketmaster Verified Fan pre-sale starting next Tuesday, Feb. 25 at 10:00 a.m. local time. See below for complete details. Additional information on The Bootleggers and pre-sale registration can be found here: https://www.lukecombs.com/bootlegger-membership/.

The tour continues a groundbreaking and historic series of years for Combs, who made his debut as the musical guest on NBC’s “Saturday Night Live” earlier this month with host JJ Watt performing two songs from his critically acclaimed new album, What You See Is What You Get: “Lovin’ On You” and “Beer Never Broke My Heart.”

In November, What You See Is What You Get, debuted at No. 1 on the all-genre Billboard 200 chart as well as Billboard’s Top Country Albums chart with 172,000 equivalent units sold. It was also a global No. 1 album, topping charts in Canada, Australia and the U.K. Out now via River House Artists/Columbia Nashville (stream/purchase here ), the record enjoyed the largest streaming week ever for a country album with 74 million on-demand streams. It also achieved the biggest first week of album streams ever for a country artist on Apple Music and was the first country album ever to hit No. 1 on the platform’s U.S. overall albums chart, while also setting a new global record for first-week streams for a country album at Spotify and breaking the Amazon Music record for more first-week streams than any other country album debut.

Produced by Scott Moffatt, What You See Is What You Get features 17 songs including the five tracks previously released via The Prequel EP last summer. The EP debuted at No. 1 on Billboard’s Top Country Albums chart with all five tracks charting on Billboard’s Hot Country Songs Top 25—a feat not accomplished by any artist in 60 years since Johnny Cash in 1959. Additionally, Combs’ last single, “Even Though I’m Leaving,” spent its third week at No. 1 at country radio, making it Combs’ seventh consecutive No. 1—a first on Billboard’s Country Airplay chart. Following this success, Combs’ new single, “Does To Me” featuring Eric Church, was recently shipped to country radio.

In celebration of the release, Combs is set to headline his first ever stadium show at Appalachian State University’s Kidd Brewer Stadium in Boone, NC on May 2. The sold-out stadium show is part of Combs’ “What You See Is What You Get Tour,” which continues Combs’ historic success on the road with all ten of the concerts selling out immediately after going on-sale.