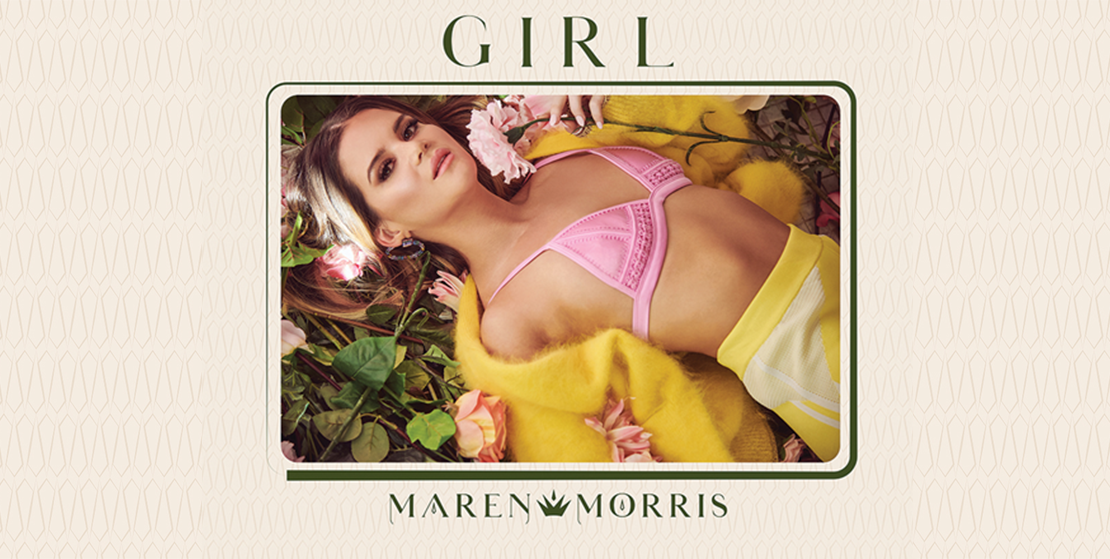 Superstar Maren Morris’ smash single “GIRL” is No. 1 on country radio this week, the first solo song by a woman to top the Billboard Country Airplay Chart since February 2018 and Morris’ third time at No. 1 overall.
Upon its release earlier this year, “GIRL” had the highest debut on Billboard’s Country Streaming Songs chart by a female artist and the highest weekly streams by a female country artist ever. The song is the title track from the multi-Platinum artist’s second album, which shattered the record for the largest-ever debut streaming week for a country album by a woman with 23.96 million streams in its first week. The album debuted at No. 4 on the Billboard 200, No. 1 on the Billboard Top Country Albums chart and continues to receive rave reviews. GIRL is out now via Columbia Nashville.
Morris is currently in the midst of a sold-out world tour, including appearances this weekend at Newport Folk Festival with The Highwomen—her all-star collaboration with Brandi Carlile, Natalie Hemby and Amanda Shires—and with Dolly Parton and The Highwomen as part of a history-making all women Saturday night headline set, during which Parton congratulated Morris on the No. 1 from stage. GIRL: The World Tour continues this summer, and Morris will support Miranda Lambert on her Roadside Bars & Pink Guitars tour this fall. Visit marenmorris.com for full tour details.
This year Morris received five Grammy nominations including Record of the Year and Pop Duo/Group performance for her massively acclaimed hit “The Middle” with Zedd and Grey, Country Solo Performance, Country Duo/Group Performance and Country Song of the Year. In May, alongside Zedd and Gray she was awarded with a Billboard Music Award for Dance/Electronic Song.
Morris won a Grammy Award for Best Country Solo Performance at the 59th Grammy Awards, was named New Artist of the Year at the 50th Annual CMA Awards, Top Country Female Artist at the 2018 Billboard Music Awards and New Female Vocalist of the Year at the 52nd Academy of Country Music Awards. She was also the most played female artist on country radio in 2017 and 2018.
The 29-year-old singer-songwriter from Arlington, Texas got her start playing in bars around her hometown and quickly made a name for herself with her Gold certified debut album Hero and its Platinum-selling “My Church,” Gold-selling “80s Mercedes” and “I Could Use A Love Song.” Hero and its singles topped charts nationwide, set Country radio records, and were some of the most critically acclaimed works of 2016.
Recent critical praise for GIRL:“A Texas songwriter with a sharp eye, a velvet voice and a mean streak…‘GIRL’ sets the bar high right away. It’s the most ambitious and eccentric song she’s done yet, an emotional powerhouse driven by jagged rock guitar.”—Rolling Stone
“Country’s most innovative young star”—NPR
“Country star Maren Morris is the strongest she’s ever been…Now she’s testing the limits of just how far she can go.”—Women’s Health
“Morris represents a new generation of women in country who are working to transcend the boundaries of their Nashville roots” —TIME
“GIRL is a 14-song collection showcasing Morris at her prime, swerving lanes between genres while maintaining her deep and respectful country roots.”—GQ
“However good Morris and her band sound on recorded tracks, they sound a hundred times better when you’re there in the room with them.”—UPROXX
“a pocket-sized arena spectacle”—The Tennessean
“She’s carved a unique place for herself by confounding expectations”—Houston Chronicle