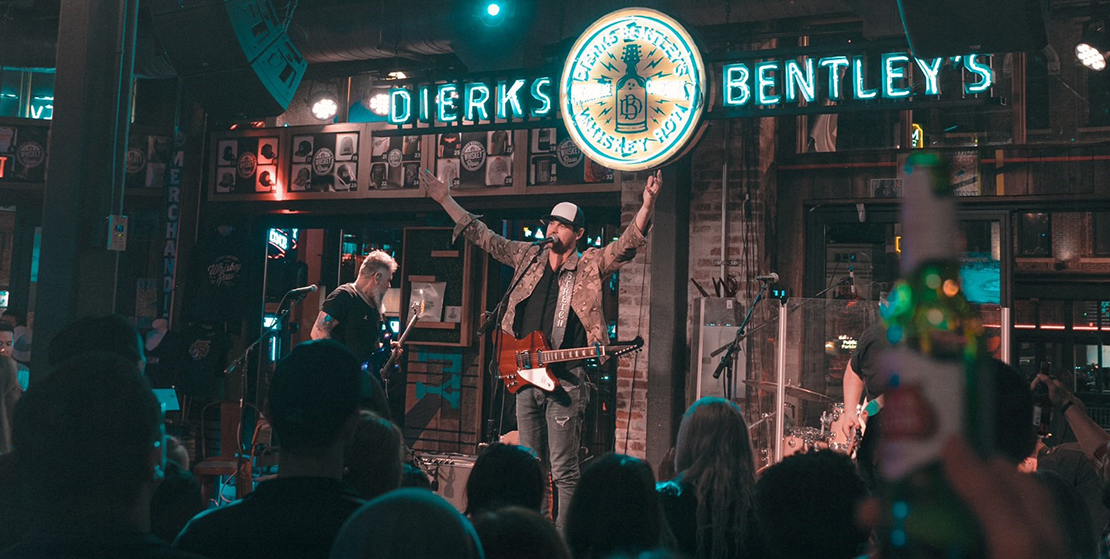 RECORDS/Arista Nashville breakthrough entertainer Matt Stell thrilled hundreds of fans last evening when he performed a pop-up show at Dierks Bentley’s Whiskey Row Nashville. Stell dubbed the event a celebration of the recent launch of his Give A Damn Foundation, and during his intensely energetic 13-song set, attendees made donations in tip buckets totaling over $1320 which will go directly to St. Jude Children’s Research Hospital. Matt Stell expands upon Give A Damn Foundation HERE .

“A wise man once told me, that the only thing you have to do to make the world a better place is to just give a damn,” explained the singer-songwriter. “And that always meant something to me. And that’s why I called our new cause theGive A Damn Foundation.”

“So what’s the Give A Damn Foundation? Well basically, it’s our way to give back. Because the way I see it – I get to live my dream everyday playing music all over the country, and we want to make other peoples’ dreams come true.”

According to Stell, “We’re going to have a great time choosing the charities we care a lot about. For the pop-up show, donations went to St. Jude Children’s Research Hospital. Additional charities we’ve made Give A Damncommitments to are Doctors Without Borders and the Humane Society, just to name a few. Because the bottom line is, if you give a damn and I give a damn, we’re going to make this world a better place and have a lot of fun doing it.”

Limited edition Give A Damn wristbands are now available HERE. 100% of all the proceeds from wristband purchases go to Give A Damn Foundation.

Matt Stell’s latest single, “Everywhere But On,” is the title track of Stell’s debut EP (listen HERE) and the name of his first headline tour which kicked off January 24 featuring support artists Chris Bandi and Ray Fulcher. “Everywhere But On” was co-written by Matt Stell, Paul Sikes and Lance Miller and produced by Ash Bowers and Stell.

The RECORDS/Arista Nashville entertainer performed his Gold-certified multi-week No. 1 airplay smash “Prayed For You” on two nationally televised programs on ABC – “Bachelor in Paradise” (Aug. 2019) and “Good Morning America (Jan. 2020). On the Billboard Country Airplay chart, “Prayed For You” was the ONLY debut artist single to top the chart in 2019. In addition to holding No.1 for two consecutive weeks on Billboard, Stell’s hit topped the Country Aircheck/ Mediabase Airplay chart as well. Penned by Stell, Ash Bowers, and Allison Veltz Cruz, “Prayed For You” has massed nearly 165 million streams.

The official music video for “Prayed For You” (view HERE) premiered via People, and reached No.1 on CMT’s Hot 20 Countdown. Stell was the only country artist picked for Vevo DSCVR 2020, which spotlights promising new talent, as well as being named a CMT Discovery Artist and Taste of Country’s “Ones To Watch.” “Prayed For You” along with “Home In A Hometown,” a collaboration with Jimmie Allen, and Stell’s sultry cover of Ariana Grande’s “God is a woman” can be found on Stell’s EP, Everywhere But On . Last fall, the singer-songwriter joined Chris Young on his “Raised On Country World Tour 2019.”