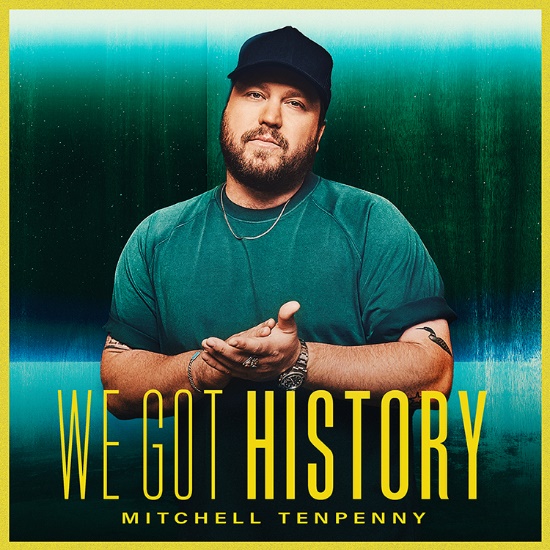 “WE GOT HISTORY” TO COUNTRY RADIO TODAY!

Riser House/Columbia Nashville/Sony Music Nashville artist Mitchell Tenpenny is releasing a new single to country radio today, “We Got History,” from his new album This Is The Heavy released in September. The song comes on the heels of Mitchell’s history making success with the shortest time between #1 songs in the modern chart era with a three-week span between “Truth About You” and “At The End Of A Bar” with Chris Young.

Mitchell, who wrote “We Got History” with Andy Albert, Devin Dawson, and Jordan Schmidt said, “Everybody has a story and a past. You don’t always have to hate where you come from. It’s ok to remember who got you to where you are. There is a respect that is mature and healthy and that’s what I wanted to talk about in this song. I’m so pumped for this to be my next single at country radio.”

MusicRow Magazine heralded the new album, “Mitchell Tenpenny blazes his own trail on new 20-track album. A charming facet to Tenpenny’s music that has been ever-present since the beginning is his references to Nashville. Between him singing about a house party off of Franklin Pike on ‘More Than Whiskey Does’ and his many mentions of bars in midtown, the songwriter is intentional with including details about his hometown.” Nash News said, “This collection has the makings to take Tenpenny to new heights. It’s adventurous enough to draw new fans in and is authentically Tenpenny enough for his existing following. Whether he’s singing about not wanting to see an ex, drinking through a heartache, or being lost in memories, he is able to tell the descriptive stories he wants to.” Entertainment Focus shared, “Ask anyone in Nashville who the best five singers in town are and I’ll bet you any amount of the money that the name that comes up amongst the most will be Mitchell Tenpenny.”

Fresh off this year’s guest slot on Luke Bryan’s “Raised Up Right Tour,” Mitchell will launch his own headline tour in 2023, “This Is The Heavy Tour.” Due to popular demand for tickets when the tour went on sale, additional shows were added to the schedule. Warner Music Nashville’s Tyler Braden will open most dates. Tickets are available now at mitchell10penny.com. The tour includes back-to-back concerts at the Ryman Auditorium in Nashville on February 3 & 4. Mitchell, a Nashville native, sold-out his first-ever headline concert there in the fall of 2021 and deemed it ‘a childhood dream come true.”

“This Is The Heavy Tour”

(*Tyler Braden not on this date)