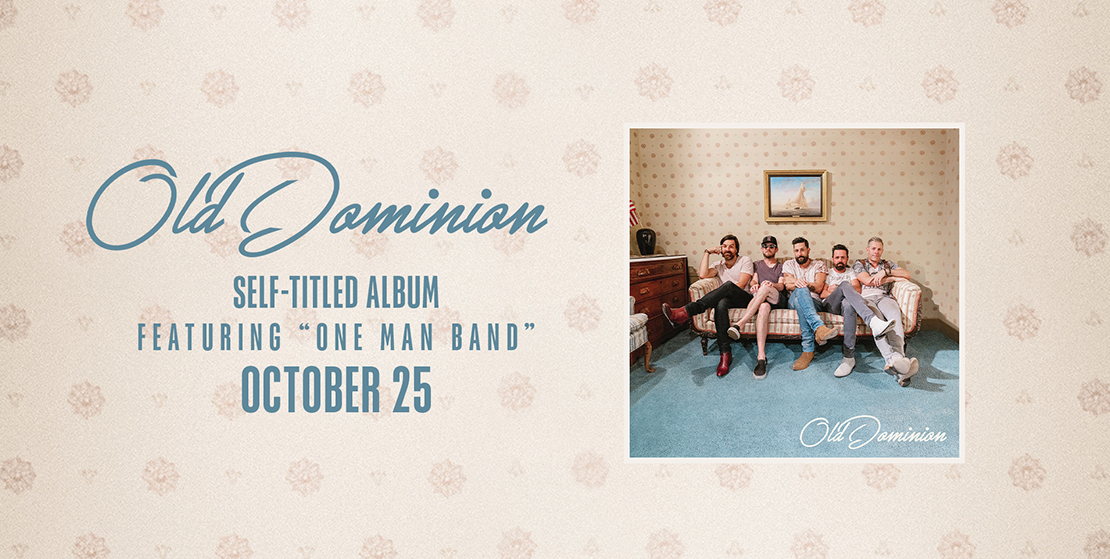 Acclaimed CMA Vocal Group of the Year and two-time ACM Group of the Year, Old Dominion celebrate their SOLD OUT Red Rocks show by releasing a new song “Midnight Mess Around” from the band’s self-titled, third studio album set for release on Oct. 25. Click HERE to listen.

“‘Midnight Mess Around’ is a song we wrote years ago with our old friend, the late, great Andrew Dorff,” said Old Dominion frontman Matthew Ramsey. “It’s been a favorite of ours for a long time, but we never got around to recording it. The old-school Ronnie Milsap/Rolling Stones’ vibe is a sound we’ve never attempted before, but as we got deeper into the recording of this album, it seemed like we were missing that sexy country feel. So we messed around a little.”

“Midnight Mess Around” marks the fifth track released from the band’s upcoming album. Other cuts include “My Heart Is A Bar,” which was written by band members Ramsey, Trevor Rosen,and Brad Tursiwith Shane McAnally and Josh Osborne; the poignant “Sometimes People Do”; “One Man Band,” the band’s current single which has nearly 75 million U.S streams; and “Make It Sweet,” which reached No. 1 on Billboard Country Airplay and Mediabase charts, making it Old Dominion’s seventh No. 1 song. Listen a nd pre-order Old DominionHERE.

This month, Old Dominion announced dates for their “We Are Old Dominion Tour” in Canada kicking off in 2020. The Gold & Gold Productions, AEG, and Concerts West powered outing will hit 12 cities withMitchell Tenpenny and Meghan Patrick set to open on select dates. In addition, they will be doing two special nights in Niagara Falls, ON at the Fallsview Casino Resort as “An Evening With Old Dominion, The Band Behind the Curtain.” During these shows fans can expect to see the band showcase a set list of chart topping hit songs they’ve penned that have been recorded by other artists, as well as the stories behind the songs. Click HERE for full routing.

ABOUT OLD DOMINION
Old Dominion has emerged as one of the hottest breaking bands out of Nashville, fusing clever lyrics and an infectious sound. Their lyrical wit and hook heavy songwriting has certainly proved a winning method: since breaking onto the music scene in 2014, the band has notched seven No. 1 singles at country radio, surpassed one billion on-demand streams, earned several Platinum and Gold single certifications. They are currently headlining arenas and amphitheaters around the globe extending into 2020 with their recently announced “We Are Old Dominion Tour.” The reigning CMA Vocal Group of the Year notched their third nomination in the category in 2019 and they are the reigning and two-time ACM Group of the Year. In 2017 frontman Matthew Ramsey was ASCAP’s “Artist of the Year” and the band has received numerous nominations including CMT Music Awards, American Music Awards, Billboard Awards, and iHeart Radio Awards. Old Dominion consists of lead singer Matthew Ramsey, lead guitarist Brad Tursi, multi-instrumentalist Trevor Rosen, bassist Geoff Sprung, and drummer Whit Sellers. Their melodic, self-titled third LP will be released on Oct. 25, 2019.