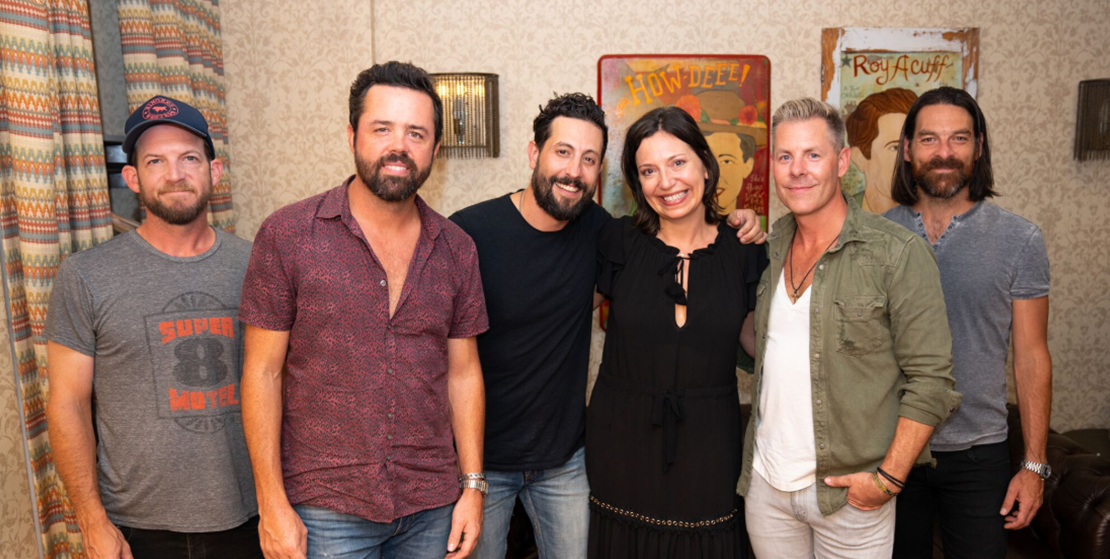 Last night, acclaimed country band Old Dominion sold out and electrified the historic Ryman Auditorium in Nashville for their special headline show: “An Evening With Friends.” The gig raised a total of $40K for charity, with half of the proceeds benefitting the Opry Trust Fund  and the other half benefitting the Ryan Seacrest Foundation.
Old Dominion front man and 2017 ASCAP Artist Writer of the Year Matthew Ramsey said, “What an unforgettable night.  The Nashville community has given so much to us. Our lives have changed in ways we could never have imagined – so we felt like this show at the Ryman was a great way to start giving back. There was so much love and music and history swirling around. We are beyond proud to be able to raise money and help those who need it – along with help from our friends!”Check out photos below of the acclaimed band of songwriters alongside Sally Williams [SVP of Programming and Artist Relations for Opry Entertainment and General Manager of the Grand Ole Opry] and Meredith Seacrest [Executive Director and COO of the Ryan Seacrest Foundation].

During this unforgettable evening, the Platinum-selling quintet and reigning Academy of Country Music Vocal Group of the Year welcomed a bevy of special guests to the stage for collaborations, including Kenny Chesney, Kelsea Ballerini, Sam Hunt, and Michael Ray for show-stopping renditions of fan favorites. Kenny surprised the band on stage and had them play “Save It For A Rainy Day,” which was penned by Matthew Ramsey and Brad Tursiand hit #1 for 3 consecutive weeks. Kelsea joined the band to duet their #1 single “Written In The Sand” and her single “I Hate Love Songs,” which was co-written by band member Trevor Rosen . Michael Ray then performed his latest energetic single “The One That Got Away,” which was penned by Matthew and Trevor. Lastly, Sam Hunt performed 2 songs with the band that included the #1 single “Make You Miss Me,” as well as “Ex To See,” both of which were co-written with Sam by Matthew Ramsey. Old Dominion also performed 19 additional songs during their 120 minute set covering all their #1 hit singles, fan favorites, and debuted two brand new song unreleased songs including the youthful, energetic “Make It Sweet” and the sentimental and spiritual “Smooth Sailing.”

“An Evening With Friends” represents a milestone for the group who are steeped in songwriting and live to play. A place like Nashville’s legendary Ryman Auditorium is hallowed ground. After selling out arenas across the U.S. and Canada on the winter leg of their “Happy Endings World Tour,” the band wanted to check the iconic venue off their bucket list before picking back up on the fall leg of their arena tour. The run is set to kick off on Oct. 4 in Knoxville, TN at the Knoxville Coliseum.

It was a scorching summer for Old Dominion. The band recently released their Spotify Singles — “Hotel Key” and a cover of Halsey’s “Bad At Love.”They also performed “Hotel Key” and “Written In The Sand” as part of the star-studded lineup for ABC’s “CMA Fest” television special. The group’s marathon tour cycle in support of its chart-topping second full-length album, Happy Endings, is well underway as they headline venues coast-to-coast. See the full itinerary below.

On the way to their fifth #1 off of their sophomore album, “Hotel Key,” which is currently #3 on the country charts, is the latest single from the bands sophomore album Happy Endings which debuted at #1 on Billboard’s Top Country Albums chart and #7 on the Top 200. The album also produced the singles “Written in The Sand” and “No Such Thing As a Broken Heart,” which also hit #1 on the Billboard Country Airplay and MediaBase charts. This achievement marked the Platinum-selling country quintet’s fourth total and third consecutive #1s. The group has also surpassed 1 billion on-demand streams.