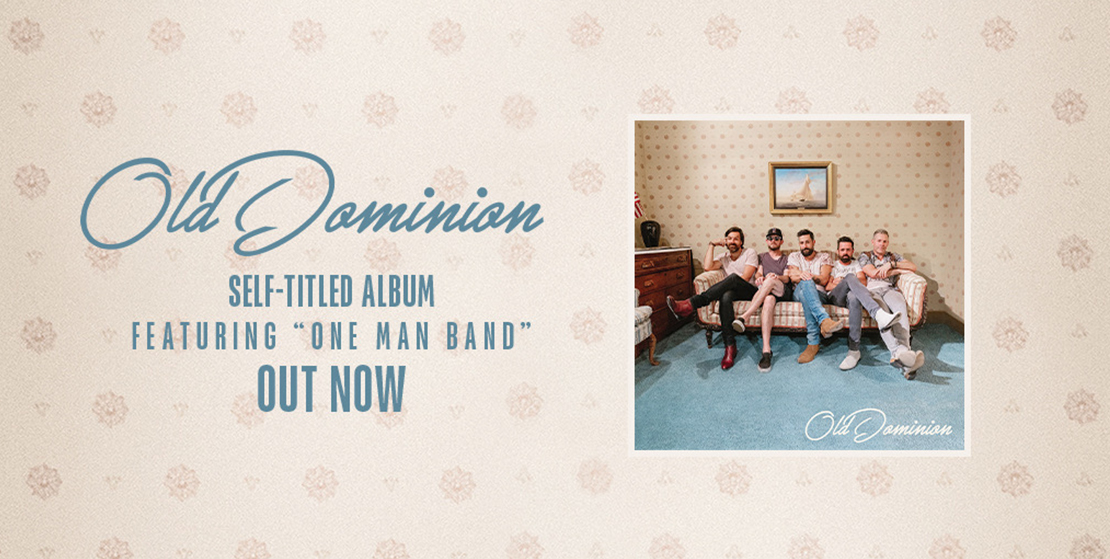 Acclaimed CMA Vocal Group of the Year and two-time ACM Group of the Year, Old Dominion release their self-titled, third studio album today via Sony Music Nashville. The band co-produced the entirety of the album for the first time alongside longtime collaborator Shane McAnally. Download and stream Old Dominion HERE.

“It’s finally here. It’s hard to believe the wait is over,” said band frontman Matthew Ramsey. “We’ve been waiting for months to put this album out, but we’ve been waiting our whole lives to create it. Just by listening, you give us purpose. Thank you for the opportunity to share our stories with you!”

Additionally, Old Dominion announced their new podcast co-produced by iHeartRadio, titled “One Fan to Interview the Band.” The podcast, distributed through the iHeart Podcast Network, will see fans host through the five-episode series. Each episode will explore a different theme ranging from the story behind the album to life outside of touring and everything in between. The first episode debuts Nov. 1 on iHeartRadio and everywhere podcasts are heard.

Old Dominion received a nomination Thursday for Favorite Duo or Band – Country for the 2019 American Music Awards. The band is nominated a third time for Vocal Group of the Year at the upcoming 2019 CMA Awards. Last year, the band took home the trophy, which followed their second Group of the Year honors at the ACM Awards earlier this year.

The current single, “One Man Band,” was released as a fan favorite with 127 million streams and a performance on “Good Morning America.” The first single from the album, “Make It Sweet,” reached No. 1 on Billboard Country Airplay and Country Aircheck/Mediabase charts, making it Old Dominion’s seventh No. 1 song.

Old Dominion recently announced dates for their “We Are Old Dominion Tour” in Canada kicking off in 2020. The Gold & Gold Productions, AEG, and Concerts West powered outing will hit 12 cities with Mitchell Tenpenny and Meghan Patrick  set to open on select dates. In addition, the band will be doing two special nights in Niagara Falls, ON at the Fallsview Casino Resort as “An Evening With Old Dominion, The Band Behind the Curtain.” During these shows, fans can expect to see the band showcase a set list of chart-topping hit songs they’ve penned that have been recorded by other artists, as well as the stories behind the songs. They will also return to the U.S. on Nov. 1 to finish out their “Make It Sweet Tour.” Click HERE for full routing.

7. Do It With Me
Matthew Ramsey, Trevor Rosen, Shane McAnally