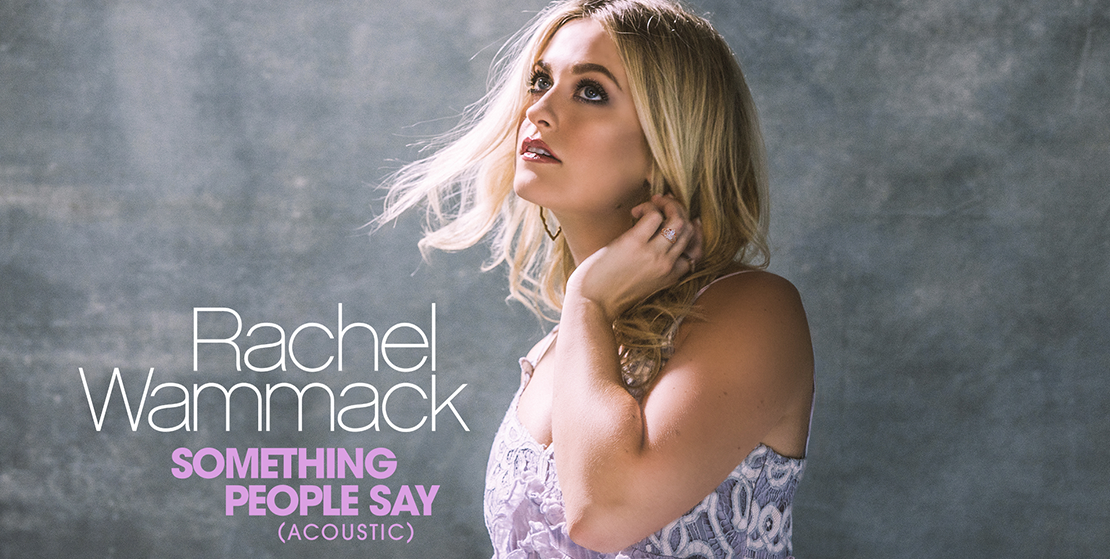 RCA Records Nashville’s Rachel Wammack released new music today in the midst of a whirlwind week of performances and appearances around the CMT Music Awards and CMA Music Festival in Nashville. Listen HERE.

“It’s been an incredible week and it’s not even over,” exclaimed Wammack. “I’ve seen people I met on the road this past year and made new friends I know I will be seeing again in the future. It’s connecting with music lovers from all of the country, and the world, that makes this week so memorable.”

To celebrate the traditional artist rite of passage known as CMA Music Festival, Wammack is releasing new music, the poignant, and thought-provoking “Something People Say,” a song Wammack co-wrote with Sam Ellis and Derrick Southerland that speaks to the impact of words and why they matter:

I didn’t think I’d ever see the day/
That “I love you” would turn into/
Just something people say.

Wammack had numerous opportunities to share the deeply-moving song with her growing fan base. On Monday, she participated in an event benefiting music education through the CMA Foundation at Reese Witherspoon’s Nashville storefront Draper James hosted by The Nash Chat. Wednesday, she performed for the CMT Block Party Presented by Wendy’s before walking the Red Carpet at the CMT Music Awards. Thursday, she made her CMA Music Fest debut on the Chevrolet Breakout Stage before meeting fans at the One Country and Sony Music Nashville booths in the Music City Center. Today, Wammack will participate in a CMT Next Women of Country panel and acoustic performance at the Country Music Hall of Fame and Museum (12:30 PM/CT) before making an appearance at Spotify @ Ole Red. And Saturday, she will perform on the Radio Disney stage in the Music City Center (10:00-11:00 AM/CT), then the Sirus XM Music Row Happy Hour before hitting the road to open for Rascal Flatts Sunday at the PNC Bank Arts Center in Holmdel, NJ.

Singled out by Sounds Like Nashville as a “much needed female voice,” Wammack is combining her personal and artistic growth alongside an “empowered posture” (NPR), which is catching the attention of fans and critics.

After writing her autobiographical debut single “Damage,” Wammack continues to evolve, crafting introspective, relatable lyrics including “Something People Say” and “Enough.” The music reflects a new chapter for Wammack, who recently became engaged to her long-time boyfriend, she continues to steadily forge her own path in the genre by showcasing “contemporary country in ways that should prove amenable to radio” (Entertainment Weekly). Download Wammack’s music  HERE.

The 24-year-old Muscle Shoals native has a “deep-rooted, classic sound” (Wide Open Country) influenced heavily by the rich music history from her hometown. Her songs showcase a “powerful, raw, honest collection” (All Access), which has earned her recognition as the only artist in the genre selected for Entertainment Weekly’s “2019 Artists to Watch” list. Wammack also made Rolling Stone’s “10 Best County EPs of 2018, Amazon and NPR ’s “Best Music of 2018” list, while earning additional “2019 Artist to Watch” acclaim from multiple outlets including AOL, Pandora, Music Row, Pop Culture,Sounds Like Nashville ,and more. Pegged as CMT’s “Next Women of Country” as well as  Bobby Bones “Class of 2019,” Wammack shares “an undeniable air of confidence and sincerity when she performs” (Taste of Country) that she will take that on the road this year at multiple festivals throughout including Country LakeShake in Chicago and Faster Horse Festival in Brooklyn, MI. For more information, visit  www.rachelwammack.com.