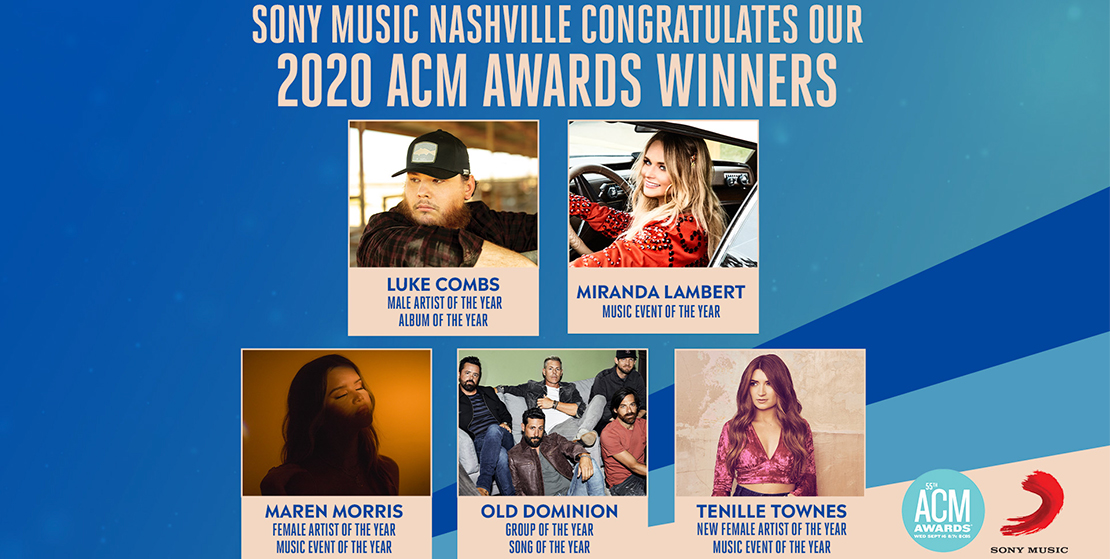 Sony Music Nashville earned 12 trophies during the 55th ACM Awards Wednesday, the most of any label group, and the most in SMN’s 30-year history.

Luke Combs was named Male Artist of the Year and won Album of the Year for his No. 1, Platinum-selling LP What You See Is What You Get. Combs performed his new single “Better Together” from the winning project at Nashville’s Bluebird Café, as well as his 4x Platinum hit “When It Rains It Pours.”

Maren Morris received her first Female Artist of the Year Award after being an early winner for Music Event of the Year (“Fooled Around and Fell In Love” with Miranda Lambert, Elle King, Ashley McBryde, Tenille Townes, and Caylee Hammack). Morris took the stage at the historic Ryman Auditorium to perform her current single “To Hell & Back.”

Old Dominion nabbed their third consecutive Group of the Year Award and also earned their first-ever Song of the Year Award for their Platinum No. 1 hit “One Man Band.” The group’s Matthew Ramsey, Brad Tursi, and Trevor Rosen earn additional accolades as co-writers on the track. The quintet performed a medley of No. 1 hits from the Ryman Auditorium that included “One Man Band,” “Written in the Sand,” “No Such Thing as a Broken Heart,” “Snapback,” “Break Up with Him,” “Song for Another Time,” and “Make It Sweet.”

Tenille Townes was also an early winner, earning New Female Artist of the Year and Music Event of the Year accolades. She performed her debut single “Somebody’s Daughter” from the Ryman Auditorium.

Miranda Lambert extended her streak as ACM’s most decorated artist ever with her win for Music Event of the Year. She performed her No. 1 smash hit “Bluebird” with co-writers Natalie Hemby and Luke Dick at the Bluebird Café.